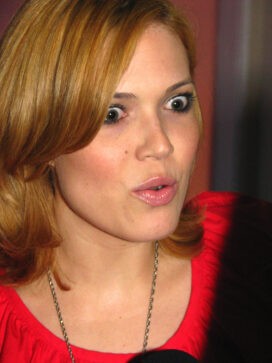 Once a bubble-gum pop star in the manner of early Jessica Simpson and Britney Spears, Mandy Moore now works to be thought of as a mature singer and actress, appearing mostly on television.

She was born in New Hampshire and raised in Orlando, Florida, where she became a local celebrity by singing national anthems for area sports teams.

In 1999 she released her first album, So Real, which included the hit single “Candy.” Her second album, I Wanna Be With You, was released in 2000.

Her early films included the teen romances A Walk To Remember (2002, with Daryl Hannah) and Saved! (2004). She then graduated to more mature roles and appeared in Romance & Cigarettes (2005, starring James Gandolfini) and American Dreamz (2006, with Hugh Grant).

Her fourth album, Coverage (2003), received a less than enthusiastic response, and in recent years Moore has focused on her acting career, including a number of short-lived television series.  She has co-starred in Grey’s Anatomy (2010), Tron: Uprising (2012), This is Us (2016) and Tangled: The Series (2017).

Something in Common with Mandy Moore