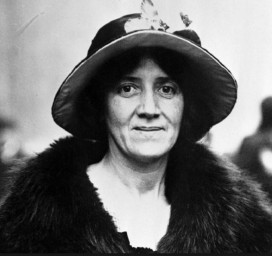 Marie Stopes was a palaeobotanist who became the United Kingdom’s greatest advocate for birth control after the 1918 publication of her book Married Love. Trained in biology and geology, she had her doctorate by the time she was 24 years old, when she became Manchester University’s first female lecturer in science. She studied and did field work in Japan and Canada, but after the annulment of her first marriage, she set out to educate women on sex in marriage. The book Married Love was a controversial bestseller (banned in the United States); she followed it with Wise Parenthood that same year. She and her second husband opened a clinic in London in 1921 to provide birth control and health care — but not abortions — to married women. After 1935, Stopes stopped publishing scientific articles and focused on her fame as an author and advocate for birth control. Although lauded as a pioneer in that field, Stopes was also known to be a crazed fan of eugenics, in favor of sterilizing “inferior” members of society. Marie Stopes International was founded nearly 20 years after her death and provides contraception and abortion services around the world.

Something in Common with Marie Stopes