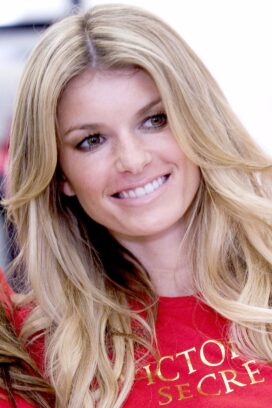 Marisa Miller is a strawberry blonde model who grew up surfing in Santa Cruz, California.

According to Sports Illustrated, Marisa Miller was discovered in 2001 by fashion photographer Mario Testino, who took pictures of her riding the waves in California. The next year she appeared in the Sports Illustrated swimsuit issue, and soon appeared on the covers of Vogue, Fitness and Shape, among other high-profile magazines.

Her athletic West Coast look was at first reminiscent of another SI model, Christie Brinkley, but Miller later adopted the more typical skinny supermodel look. She also has modelled for the ad campaigns of Tommy Hilfiger and has made frequent appearances in the Victoria’s Secret lingerie catalogs. She has been a spokesmodel for Harley-Davidson motorcycles and Captain Morgan rum.

Among her many other covers, Marisa Miller appeared on the cover of the 2008 edition of the Sports Illustrated swimsuit issue.

Marisa Miller is 5’8″ tall and weighs 110 pounds, according to her official site… She married surfer and lifeguard Jim Miller in 2000; they were divorced in 2002. She married music producer Griffin Guess in 2006. They have two sons: Gavin Lee Guess (born 2012) and Grayson Guess (b. 2015)… Marisa Miller took a spin at Daytona Speedway with Nascar driver Dale Earnhardt, Jr. for a 2003 Sports Illustrated feature… Marisa Miller is no relation to singer Marissa Lee Miller or to the actress Marisa Miller who appeared in the 2002 film A Walk to Remember.

Something in Common with Marisa Miller