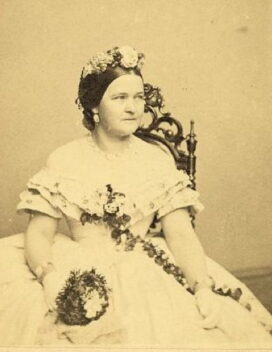 Mary Todd Lincoln was the wife of President Abraham Lincoln and the First Lady of the United States from 1861 until her husband’s assassination in 1865.

Born into a prosperous family in Kentucky, Mary Todd was nearly 24 years old, ambitious and educated when she married Lincoln in 1842.

But she has gone down in history as a sad, crazy woman, overwhelmed by grief from the deaths of her sons and husband. (Three of her four sons died before reaching adulthood, one of them in the White House in 1862.)

Her time in the White House was spent arguing with Congress about funding repairs to the White House, going on extravagant shopping sprees and causing Washington whispers with her unpredictable behavior.

First Lady Mary Lincoln endured public criticism for her Southern roots, but later in life became a sympathetic figure. She spent a few months in an insane asylum in 1875, committed there by her only living son, Robert. Mary then settled in France, but returned to the U.S. after a back injury in 1879.

She died in 1882 after suffering a stroke.

After the death of her son Willie in 1862 Mrs. Lincoln turned to spiritualists and held séances in the White House… Abe’s nickname for Mary was “Molly,” until after their sons were born — then he called her “Mother.”

Something in Common with Mary Lincoln