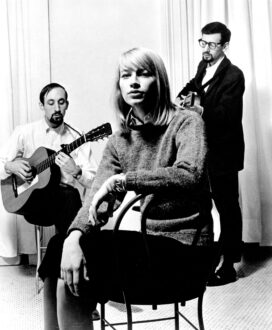 Mary Travers was the earnest, sweet-voiced singer from the folk group Peter, Paul & Mary. With hits like “Leavin’ on a Jet Plane,” “If I Had a Hammer,” and “Puff (the Magic Dragon),” they were leaders of the folk music revolution of the 1960s and active members of the “flower power” political protests of the decade.

Mary Travers was born in Kentucky but raised in Manhattan’s Greenwich Village, where she began singing casually with friends. In 1960 she joined Peter Yarrow and Noel “Paul” Stookey in a trio that began performing in New York folk clubs as Peter, Paul & Mary. They were a hit, due both to their music and to their friendly-beatnik looks; the boys had trim beards, and slender Mary stood out with her long, straight blonde hair.

The group had a hit with Bob Dylan‘s tune “Blowin’ In the Wind,” sang it at the 1963 civil rights march on Washington, and later sang it as a protest against the Vietnam War. Their 1962 debut album Peter, Paul & Mary sold over two million copies; it was followed by albums including In the Wind (1963), See What Tomorrow Brings (1965) and the children’s album Peter, Paul & Mommy (1969, titled for the name Mary’s daughter Erika gave to the group).

Peter, Paul & Mary broke up in 1970, but reunited for concerts many times over the years after that, even becoming nostalgic fund-raising favorites on public television. Travers also released five solo albums, including Mary (1971) and All My Choices (1973). She had a bone marrow transplant in 2006 and battled leukemia for many years before her death in 2009.

Peter, Paul & Mary’s first performance was at the Bitter End club in 1961… The 1963 march on Washington was the same event where Martin Luther King, Jr. gave his “I Have a Dream” speech… “Leavin’ On a Jet Plane” was written by John Denver… Mary Travers was married four times; her last marriage, to restauranteur Ethan Robbins, lasted from 1991 until her death. She had two daughters: Erika (b. 1960) and Alicia (b. 1966)… Travers was 5’10” tall, according to Bloomberg News.

Something in Common with Mary Travers