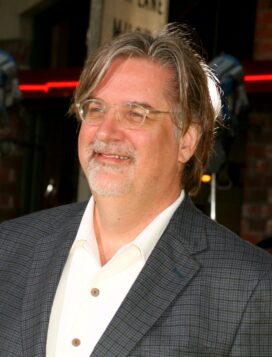 Matt Groening’s animated creations, the Simpson family, first appeared on The Tracey Ullman Show, which opened on the Fox network in 1987. The new network took a chance and gave The Simpsons a prime-time slot in 1989, and it soon became the network’s flagship series. The Simpsons were a bright-yellow family of cartoon goofballs: parents Homer and Marge Simpson, heck-raising son Bart, brainy daughter Lisa and infant Maggie. Bart was the early star of the show and became famous for catchphrases like “Eat my shorts.” But in time Homer, the dumb but good-hearted dad, became many viewers’ favorite. At first the popularity of The Simpsons worried those who considered it a glamorization of a dysfunctional family (it was even condemned by Barbara Bush, the First Lady of the United States). But by 2000 the show had become the longest-running animated series in television history, and a decade later the show was still running and still a popular success. Matt Groening branched out and started Futurama, another animated series that began in 1999 and ran for five seasons. Groening also draws “Life in Hell,” a syndicated weekly cartoon panel.

Matt Groening’s last name is pronounced “graining”… Matt Groening’s father was named Homer, and he has sisters named Lisa and Maggie — names echoed on the show. In a similar vein, Matt Groening grew up near Portland, Oregon on Evergreen Terrace, and that is the home street of the Simpsons on the show.

Something in Common with Matt Groening