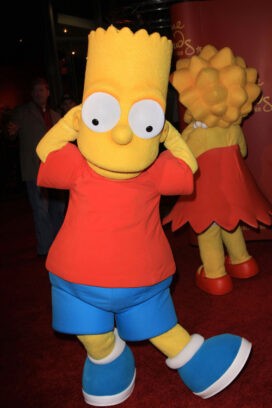 See photos of The Simpsons

Facts about The Simpsons

The Simpson family first appeared in 1988 in small animated vignettes on The Tracey Ullman Show. Creator Matt Groening and producer James L. Brooks turned the idea into a full half-hour show, which premiered on the Fox network in December of 1989. The Simpsons was a hit from the start and has remained one of the most popular television shows in history (as well as the longest-running prime-time cartoon). The show’s weekly cornucopia of guest stars has included the likes of Ringo Starr, Christina Ricci and Stephen Hawking, among many others. Simpson family members include father Homer, a beer-loving safety inspector from the local nuclear power plant; Marge, the sensible mom with a blue beehive hairstyle; Bart, the mischievous fourth-grader whose pride in being an "underachiever" was, at first, controversial; Lisa, the second-grader whose achievements and smarts go largely unnoticed; and Maggie, the speechless, pacifier-loving infant. A feature film, The Simpsons Movie, was released on 27 July 2007.

Besides Tracey Ullman, The Simpsons connection extends to Conan O’Brien, Phil Hartman and Hank Azaria… One of the many semi-regular characters is Sideshow Bob, voiced by Kelsey Grammer.