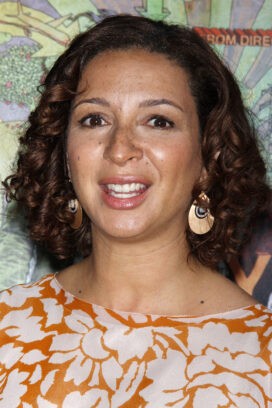 Maya Rudolph is an actress known mostly for comedy, as a cast member of TV’s Saturday Night Live and a co-star in feature films such as Away We Go (2009) and Bridesmaids (2011). Born in Florida, she grew up in southern California, where her dad was a music producer and her mom, Minnie Riperton, became a sensation with the 1975 pop ballad “Lovin’ You.” (Riperton died of breast cancer in 1979, the year Rudolph turned seven.) Maya Rudolph studied photography at the University of California at Santa Cruz. After graduating in 1994, she spent time in rock bands before joining the comedy troupe The Groundlings. She began getting small parts in television and movie productions in the late 1990s, and played a nurse in Chicago Hope (1996), a nurse in City of Angels and a nurse in the film Gattaca (1997). After she joined the cast of Saturday Night Live in 2000, her career took off, and she appeared in supporting roles in several comedies, including 50 First Dates (2004, starring Adam Sandler and Drew Barrymore), Idiocracy (2006, directed by Mike Judge), Shrek the Third (2007, as Rapunzel), MacGruber (2010) and Bridesmaids (2011, starring Kristen Wiig). Maya Rudolph also played a pensive mother-to-be in the romantic sort-of-comedy Away We Go (2009, opposite John Krasinski).

Maya Rudolph was childhood pals with Gwyneth Paltrow — their fathers were old friends… Maya Rudolph has two children with film director Paul Thomas Anderson: Pearl (b. 2005) and Lucille (b. 2009).

Something in Common with Maya Rudolph