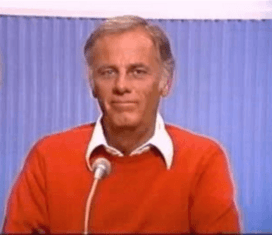 McLean Stevenson wrote comedy bits for Tommy Smothers and was a minor player on TV sitcoms in the 1960s, but it was his stint as Lt. Col. Henry Blake in the Korean War sitcom M*A*S*H (1972-75) that made him famous. As played by Stevenson, Blake was a goofy, not-too-efficient commanding officer in a lure-covered fishing hat. M*A*S*H was one of TV’s top-rated shows for more than a decade, but Stevenson left the CBS series after three seasons to sign a long-term contract with NBC. (The Henry Blake character was then killed in a famous episode of M*A*S*H*.) From 1976 to 1988 Stevenson was in five different TV series, none of which came close to the success of M*A*S*H; the best known was probably Hello, Larry, which aired from 1979-80. Stevenson graduated from Northwestern University’s School of Speech in 1952.

M*A*S*H also starred Alan Alda and Gary Burghoff… McLean Stevenson is a distant cousin to Senator Adlai Stevenson, who was the Democratic nominee for president in 1952 and 1956. According to McLean Stevenson’s obituary in the LA Daily News, he “grew up in Bloomington, Illinois, next door to his cousin Adlai, who twice ran for U.S. president and introduced him to his first Broadway play”… He died at Encino-Tarzana Regional Medical Center in California, a few hours after having bladder surgery. (The hospital was renamed Providence Tarzana in 2008)… Stevenson was 6’3” tall… After Stevenson left M*A*S*H*, his place was taken by Harry Morgan in the role of Col. Sherman Potter… Stevenson also worked for Northwestern University’s alumni relations and athletic departments from 1956-1959.

Something in Common with McLean Stevenson