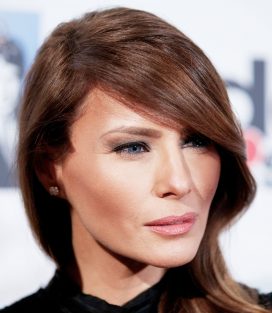 Melania Trump was the First Lady of the United States during the single term of her husband, former President Donald Trump, from 2017-21.

Melania Trump was born in the town of Sevnica in Yugoslavia, which declared its independence as Slovenia in 1991 during the breakup of the Soviet Union. By then she had already begun a modest modeling career, and in 1992 won second place in a “Look of the Year” contest in Slovenia. She began modeling in Paris and Milan before moving in 1996 to New York, where she met businessman Donald Trump at a party in 1998.

Her marriage to Trump on January 22, 2005, with Melania in a $100,000 Dior dress adorned with hand-sewn crystals, was one of the social events of the season in Palm Beach, Florida. (Among the guests was Hillary Clinton, who later became Donald Trump’s rival for the presidency in 2016.) The marriage was Melania’s first and Trump’s third. Their son, Barron William Trump, was born in 2006. Melania Trump later created her own line of affordable jewelry, Melania Timepieces & Fashion Jewelry, and a skin care line called Melania Beauty.

Donald Trump won the Republican nomination for president in 2016. Melania Trump was at the center of an unexpected controversy at the Republican convention; her speech about Trump on the convention’s opening night was discovered to have a paragraph that closely matched one from Michelle Obama’s speech to the Democratic convention of 2008. (Both said, for instance, “that you work hard for what you want in life, that your word is your bond and you do what you say.”) Though the Trump campaign denied any plagiarism had taken place, the incident became one of the most-discussed topics of the convention.

It made no difference in the end: Donald Trump defeated Democratic nominee Hillary Clinton in the general election on November 8, 2016, and Melania Trump became First Lady the next year.

Donald Trump lost his run for reelection in 2020; he and Pence were defeated by Democratic candidates Joe Biden and Kamala Harris. Melania Trump’s time as First Lady ended when Trump left office on January 20, 2021.

Melania Trump is 5’11” tall, according to her official site… Melania Trump was born Melania Knavs; during her years as a model she “Germanized her last name from Knavs, changing the v to a u and adding an extra s,” according to a 2016 story in GQ magazine… Melania Trump speaks “Slovenian, Serbian, Austrian, English, and French fluently,” according to the Fashion Model Directory… Melania Trump appeared in the annual Sports Illustrated swimsuit issue in the year 2000… Donald Trump’s previous wives were model Ivana Zelnicek (from 1977-92) and Marla Maples (from 1993-99). Both marriages ended in divorce.

Something in Common with Melania Trump