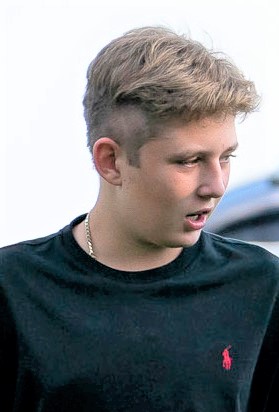 Barron Trump was born in New York City in 2006. (His famous father was 59 at the time, while his mother was 35.) He grew up in the family apartments in Trump Tower on Manhattan’s Fifth Avenue. Barron is said to have had his own floor in their home, “complete with nursery, kitchen, living room and quarters for a nanny and Mom,” as reported by People.com shortly after his birth.

Barron Trump attended Columbia Grammar and Preparatory School in Manhattan. Barron Trump has four half-siblings: Donald Trump Jr. (b. 1977), Ivanka Trump (b. 1981) and Eric Trump (b. 1984), all from Donald Trump’s marriage to Ivana Trump; and Tiffany Trump (b. 1993) from Trump’s relationship with Marla Maples.

With Donald Trump’s inauguration as president in 2017, Barron Trump followed Sasha Obama and Malia Obama as the minor child of a sitting U.S. president. For the first months of his father’s presidency, Barron Trump remained in New York City with his mother and continued school there. He then moved to the White House in Washington, D.C. in June of 2017.

Barron Trump is not named for hotel magnate Barron Hilton, it seems; “Donald just always liked the name,” reports said at the time of his birth… Melania Trump has reported that Barron Trump speaks Slovenian as well as English; she is of Slovenian birth.