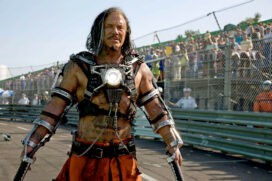 Mickey Rourke’s up-and-down acting career has seen him play pretty boys, bikers, drunks, romantics, hit men, and for a few long stretches, nothing at all.

Rourke came up through the prestigious Actor’s Studio in Manhattan and made the most of a small role as a “rock ‘n roll arsonist” in Body Heat (1981, starring William Hurt). He followed with appearances in Diner (1982), Rumble Fish (1983) and The Pope of Greenwich Village (1984), and was suddenly hot property, considered a diamond in the rough with a great future ahead of him.

Rourke plunged in Hollywood as fast as he’d risen, then abruptly took up professional boxing for four years (1991-95). Forced to retire from the ring because of neurological damage, he still worked in the movies, although in low-budget and low-profile roles. He was nearly unrecognizable as Marv in 2005’s Sin City, but he received rave reviews and reminded audiences of why he was a star in the first place.

He earned even more praise — and an Oscar nomination — for his comeback role in The Wrestler (2008) as Randy ‘The Ram’ Robinson, an aging and battered pro wrestler at the end of his rope. Rourke’s other films include Barfly (1987, based on the book by Charles Bukowski), Another 9 1/2 Weeks (1997, with Angie Everhart), The Pledge (2001, with Sean Penn) and Domino (2005, starring Keira Knightley).

Something in Common with Mickey Rourke