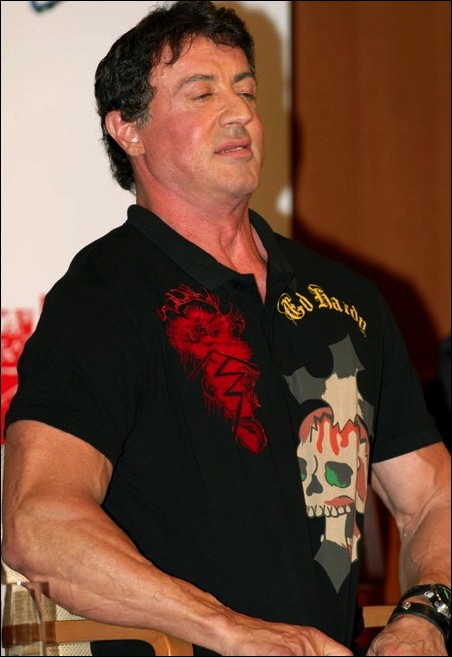 I went to see The Expendables, knowing it wouldn’t be a very good movie. The only thing that would have made it worse is if it had been a better movie. As it is, it’s delightfully bad.

Surprising, in some ways, that so many long-time professionals — Sylvester Stallone and Arnold Schwarzenegger and Bruce Willis especially — could be part of something so terrifically off-key and lame.

Except for the higher level of violence, The Expendables is a throwback to the manly action movies of the 1980s. There are the thousands of explosions and millions of bullets, the can’t-trust-the-C.I.A. theme, the Brown Foreign Dictator (BFD) and his army of poor saps, the noble and pretty young woman who — get this! — is the BFD’s daughter and, best of all, the sweaty-hot homoeroticism that we’ve all come to understand is part of being a heartless mercenary.

Brief appearances by Charisma Carpenter (Cordelia from Buffy the Vampire Slayer) and, as the BFD, David Zayas (Sgt. Angel Batista from Dexter) were pleasant surprises, but they couldn’t offset the appearances by the clotted mass of gnarled, wash-up toughguys: Dolph Lundgren, Mickey Rourke, Eric Roberts… together with Stallone and Schwarzenegger, there’s a combined 240 years of tanning bed time. Stallone, the director, also makes a point of giving us close-up after close-up of these fellers’ ugly mouths. As if his point is “You can have a hideous mouth and still be a movie star,” something he’s been proving since the late 1970s.

One such close-up, however, provides the movie’s most suspenseful scene. As Mickey Rourke delivers a touching monologue — and who doesn’t love it when mercenaries get all introspective and teary-eyed? — we’re treated to an excess of drool on his lower lip. It grows and grows… and who cares what he’s talking about, that drop is getting bigger and bigger… it’s going to drip! It’s going to roll off his lip and onto his chin!!

But no… he licks it away at the last minute. Damn!

And poor Jet Li! He’s reduced to less than a caricature. He has two fight scenes (with Dolph Lundgren), and in both he ends up being rescued by Stallone. Now, come on! Everyone in the world knows that Jet Li does not need Stallone’s help when it comes to beating someone to a pulp.

What’s the movie about? Uh… let’s see… The Expendables are AARP-rated soldiers of fortune hired by Bruce Willis (C.I.A.) to kill the Brown Foreign Dictator, who is being manipulated by Eric Roberts (former C.I.A.). Stallone and his BFF (Jason Statham) visit the island of the BFD for some recon and get shot at, so they blow up half the country and destroy its economic infrastructure in retaliation, but not before they meet the Pretty Girl (Mexico’s Giselle Itié, who fortunately never has to kiss Stallone on those godawful lips of his). Stallone and Statham barely escape, but Stallone has a need to return to the Pretty Girl (he admires her “principles” if you get my drift).

He’s going to go it alone, but his buddies are there to help. Better to die with your men-pals in a hail of gunfire, covered in their sweat and other bodily fluids, etc. etc.

They return to the land of the BFD and the Pretty Girl, blow some stuff up, kill a thousand guys who are merely protecting their sovereign state, blow some more stuff up, get the bad guys and then listen to some rock music while kissing each other.

Maybe they don’t kiss, but they fist bump.

Oh, I should have said “spoiler alert,” sorry. Now I’ve gone and ruined it for everyone.

If you want real entertainment, see Stallone’s interview on YouTube.