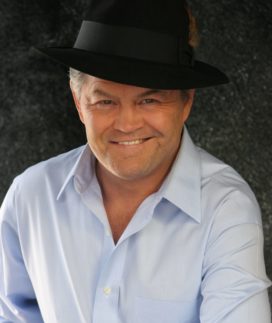 Micky Dolenz is the drummer from The Monkees, the made-for-TV 1960s band that became an enduring and nostalgic pop music institution. The group included Dolenz, Peter Tork, Michael Nesmith and Davy Jones.

Micky Dolenz was born in Los Angeles, the son of actors George Dolenz and Janelle Johnson. He did some acting as a child, notably in the TV western adventure Circus Boy (1956-58), and graduated from high school in 1962. He began writing songs and performing as a singer and guitarist, including in a short-lived band called Micky and the One-Nighters, before landing his big gig with The Monkees in 1966.

Dolenz was cast as the group’s drummer, even though he didn’t play drums. He learned as he went, and it didn’t harm the band, which was fueled by the success of their TV show The Monkees: a goofy mix of comedy, music, and heart-throbism patterned after similar movies by The Beatles. The Monkees had two #1 albums — The Monkees in 1966, and More of The Monkees in 1967 — and Dolenz sang lead on hit singles like “Pleasant Valley Sunday” and “Last Train to Clarksville.” He also wrote one of the group’s lesser hits, “Randy Scouse Git.”

After the breakup of The Monkees in 1970, Dolenz was part of a variety of Monkees reunions and spinoffs over the next five decades. With Davy Jones he was part of Dolenz, Jones, Boyce and Hart (Tommy Boyce and Bobby Hart had written songs for The Monkees) from 1975-77.  Dolenz, Tork, and Jones reunited in 1986 for a 20th-anniversary tour, and released the album Pool It! in 1987. Over the following three decades he toured and performed often with various incarnations of The Monkees that included one, two, or three other members of the group.

After the deaths of Davy Jones in 2012 and Peter Tork in 2018, Micky Dolenz and Mike Nesmith (now in their 70s) continued to appear as The Monkees.  They had just finished a final farewell tour of the USA when Nesmith died in December of 2021, leaving Dolenz as the last remaining Monkee.

Micky Dolenz has been married three times. He was married to Samantha Juste (a presenter on the BBC show Top of the Pops) from 1968 until their divorce in 1975; their daughter, Amy Dolenz (b. 1968), gained some fame as an actress. Micky Dolenz was married to Trina Dow from 1977 until their divorce in 1991, and they had three daughters: Charlotte (b. 1981), Emily (b. 1983), and Georgia (b. 1984). Dolenz then married Donna Quinter, a former flight attendant, in 2002… Donna Quinter pleaded guilty in