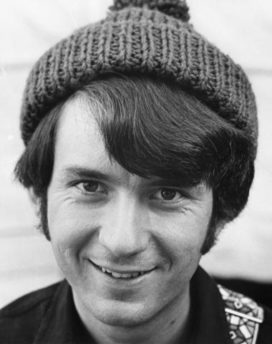 Michael Nesmith was one of the four founding members of The Monkees, a made-for-TV musical group that was a pop phenomenon in the late 1960s.

Michael Nesmith was born in Houston, dropped out of high school, and joined the Air Force in 1960, where he worked as an aircraft mechanic and earned his GED. After a short stint at San Antonio College, he moved to Los Angeles and struggled to break into the music scene. He got his break in 1965, when he answered a tryout for musicians to join a newly-created band for a comedy TV show: The Monkees.

The Monkees were a thinly-disguised takeoff on The Beatles, and the show featured Nesmith and three other Monkees (Davy Jones, Peter Tork, and Micky Dolenz) in zany antics mixed in with pop music. As “Mike,” Nesmith was the tall, brainy guitarist, known for the knitted watch cap he wore in nearly every scene. The show was a hit, and so was the music: The Monkees’ first two albums hit #1, and their singles included “Last Train to Clarksville” and “I’m a Believer.” The show ran from 1966-68, after which the group fizzled out and members went their separate ways.

Michael Nesmith formed his own group, the First National Band, which played country-rock tunes that predated bands like the Eagles. In the 1970s, Nesmith grew interested in video, forming the innovative multimedia firm Pacific Arts Corporation; a short film he made for his 1977 single “Rio” is considered one of the earliest music videos. He won the first Grammy ever awarded for music videos, in 1982, for his hour-long music and comedy video Elephant Parts. Pacific Arts produced a show for Nickelodeon, Pop Clips, that helped inspire the creation of MTV.

In the following decades Nesmith continued to write songs, perform as a solo act, and produce others. Through Pacific Arts, he also became a producer and executive producer of films like Repo Man (1984) and Tapeheads (1988). In 1980 he inherited a reported $25 million from the estate of his mother, Bette Nesmith Graham, a former secretary who invented the typewriter correction fluid Liquid Paper.

Nesmith didn’t take part in a 1986 Monkees reunion tour and 1987 album Pool It! A decade later he rejoined the band for a 1996 reunion album, Justus, and directed a TV special, Hey, Hey, We’re the Monkees. After Davy Jones’s death in 2012, Nesmith began performing more frequently with Tork and Dolenz. They recorded a well-received Monkees album, Good Times, in 2016. Peter Tork died in 2019, and Nesmith had just completed a Monkees farewell tour with Mickey Dolenz when he died of heart failure in 2021. He published a memoir, Infinite Tuesday, in 2017.

“Different Drum,” a song Michael Nesmith wrote in 1965, was a hit for Linda Ronstadt and the Stone Poneys in 1967… Michael Nesmith was married three times: to Phyllis Ann Barbour from 1964 until their divorce in 1972; to Kathryn Bild from 1976 until their divorce; and to Victoria Kennedy, from 2000 until their divorce in 2011. He had three children with Phyllis Ann Barbour: Christian (born 1965), Jonathan (b. 1968), and Jessica (b. 1970).  He also had a son, Jason Nesmith (b. 1968), from a relationship with photographer Nurit Wilde… Before joining The Monkees, Mike Nesmith recorded a few songs under the name Michael Blessing… Nesmith was a Christian Scientist, according to a Variety article published after his death in 2021.

Something in Common with Michael Nesmith