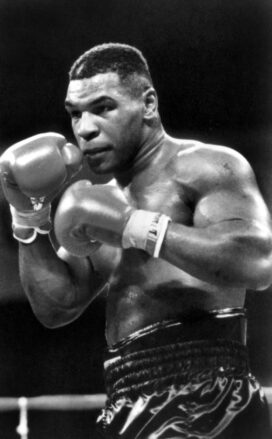 Mike Tyson is one of the most successful and notorious boxers in prizefighting history, thanks to his actions inside and outside the ring.

His speed, power and fierce aggression earned him the World Boxing Council heavyweight title in 1986, when he beat Trevor Berbick with a second-round technical knockout (TKO). Tyson was 20, making him the youngest heavyweight champion ever. The next year he beat James Smith to win the World Boxing Association title. Dubbed “Iron Mike” for his muscular physique and aggressive fighting style, Tyson became the undisputed heavyweight champion of the world.

In 1988, in one of his most famous fights, Tyson knocked out previously undefeated Michael Spinks in 91 seconds and earned $20 million. For a brief time he seemed invincible, until he was knocked out by the lightly-regarded James “Buster” Douglas in 1990.

Then Mike Tyson began making headlines for different reasons: his brief marriage to actress Robin Givens was followed by a bitter divorce battle; he was convicted of rape in 1992 and spent three years in prison; a comeback was stymied in 1997 when he bit off a chunk of Evander Holyfield’s ear in the middle of a match; he was jailed briefly again in 1999 for assault; and at a 2002 press conference to announce an upcoming bout, he attacked opponent Lennox Lewis and bit his leg. (The fight took place anyway on June 8, 2002, and Lewis knocked out Tyson in the eighth round.)

Mike Tyson’s fans considered him a troubled youth who battled long odds to become one the sport’s greatest names; his detractors said his behavior gave the sport a black eye. Tyson’s fight career never quite recovered after his stint in jail; his last fight was a loss to journeyman heavyweight Kevin McBride by a 7th-round technical knockout on June 11, 2005.

Since then, Mike Tyson has returned to the public eye as a less intimidating celebrity. He had a prominent and funny cameo in the comedy The Hangover (2009, with Bradley Cooper), and appeared on TV shows like Lip Sync Battle (2015) and To Tell the Truth (2016). He created the Tyson Cares Foundation to help kids from broken homes. He also founded the boxing company Iron Mike Promotions. He published the memoirs Undisputed Truth (in 2013) and Iron Ambition (in 2017).

Mike Tyson is famous for his many tattoos, which include images of Arthur Ashe (left bicep), Mao Zedong (right bicep), Che Guevara (abdomen), and a tribal-type tattoo around his right eye and cheekbone… Mike Tyson reportedly earned over $400 million in his career, yet was $34 million in debt before his 2005 fight with Kevin McBride, for which he was paid $5 million vs. McBride’s $150,000… On December 29, 2006 Tyson was arrested in Scottsdale, Arizona and charged with driving while intoxicated. The next year he pleaded guilty to driving under the influence and possession of cocaine, and was sentenced to 24 hours in jail and three years of probation, plus community service… The boxer Drederick Tatum on the TV show The Simpsons is widely considered to be inspired by Mike Tyson.

Something in Common with Mike Tyson