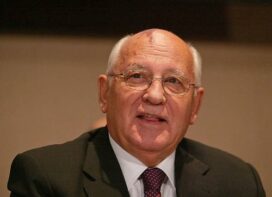 Includes a biography and press releases on international issues

Profile from their feature on "Leaders and Revolutionaries"

His biographical timeline from the Nobel Prize organization

Mikhail Sergeyevich Gorbachev was the leader of the Soviet Union (USSR) from 1985 until its collapse in December of 1991. Gorbachev trained as a lawyer at Moscow State University. He joined the Communist Party (CPSU) in 1952 and went into politics after earning his law degree in 1955. In the Stavropol region of the north Caucasus he was a party official after 1962, was made first secretary in 1970 and was elected to the CPSU central committee in 1971. Gorbachev went to Moscow in 1978 as the central committee’s secretary for agriculture, and after that rose through the ranks, thanks in large part to party patron Yuri Andropov, who became CPSU general secretary in 1982. Gorbachev was then elected general secretary in 1985 after the deaths of Andropov (in 1984) and his short-lived successor, Konstantin Chernenko. Gorbachev embarked on economic reforms and diplomatic overtures to the West that led to meetings with Prime Minister Margaret Thatcher of the U.K. and President Ronald Reagan of the U.S. (1985-88). Officially the head of state after 1988, Gorbachev launched programs, dubbed glasnost (“openness”) and perestroika (“restructuring”), that were supposed to make the state more efficient and less corrupt, but resulted in public discontent and nationalistic urges among the Soviet Union’s satellite republics. While balancing opposition from the left and right, Gorbachev was elected to the the newly-fashioned office of President of the USSR in 1990, with broad powers. He survived a coup attempt in August of 1991, but resigned from his post on 25 December 1991 as the Soviet Union collapsed. In 1992 he began the Gorbachev Foundation, a think-tank for international issues, and now speaks and writes on history, politics and international affairs. His memoir, Life and Reforms, was published in 1995.

Gorbachev’s wife, Raisa, was a highly visible part of his international travels; she died in 1999… Gorbachev, who was sometimes called “Gorby” in the press, was awarded the Nobel Peace Prize in 1990… His fiercest political rival from the left was Boris Yeltsin, who became the first president of the new Russian Federation in 1991… Gorbachev had a prominent “port wine stain” birthmark on his scalp above his right eye; it was sometimes airbrushed out of official photographs… Some experts suggest that one reason Gorbachev was not a popular president was his restriction on the manufacture and distribution of alcohol, especially vodka… In his official online biography, this is given as the explanation for the collapse of the USSR: “Destructive social and ethnic developments, which the emerging Soviet democracy was unable to curb, eventually led to the disintegration of the multinational Union of republics that Gorbachev led.”