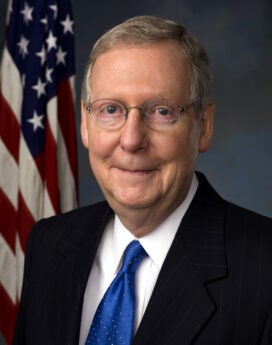 Mitch McConnell is the six-term senator from Kentucky who became Senate Majority Leader in 2015.

Mitch McConnell was born in Alabama but raised in Georgia and then Kentucky, where he earned a bachelor’s degree from the University of Louisville (1964) and a law degree from the University of Kentucky (1967). McConnell had politics on his mind from the start: he became a legislative assistant to Senator Marlow Cook (1968-70) and later served as a Deputy Assistant Attorney General in the Gerald Ford administration.

In 1977, Mitch McConnell was elected Jefferson County Judge/Executive, and used the office as a springboard to election to the U.S. Senate, winning election over two-term Democratic incumbent Walter Dee Huddleston in 1984. He was reelected five times: in 1990, 1996, 2002, 2008 and 2014.

Initially a moderate, McConnell turned increasingly conservative as he rose through the ranks during his decades in the Senate. In 2003 he was elected Senate Majority Whip, and became Senate Minority Leader after the GOP lost control of the Senate in 2006.

After the election of Democratic President Barack Obama in 2008, McConnell successfully rallied Republicans to block Obama’s initiatives at nearly every turn; in 2013 Politico called him “the face of Republican obstructionism.” The GOP won control of the Senate in mid-term elections of 2014, making Mitch McConnell the Senate Majority Leader. McConnell’s unprecedented campaign of obstruction culminated in his blockage of Obama nominee Merrick Garland for the U.S. Supreme Court during the last year of Obama’s term, forcing the seat to be left open for appointment by Republican Donald Trump in 2017.

Mitch McConnell has been married twice. He wed the former Sherrill Redmon in 1968; they had three children before divorcing in 1993. He then married Elaine Chao in 1993; she was Secretary of Labor under President George W. Bush from 2001-09, and in 2016 was named Secretary of Commerce by incoming President Donald Trump… Mitch McConnell enlisted in the U.S. Army Reserve in 1967, but did not go to Vietnam; he was discharged due to optic neuritis, an inflammation of the optic nerve… Mitch McConnell is the longest-serving U.S. senator in Kentucky history.

Something in Common with Mitch McConnell