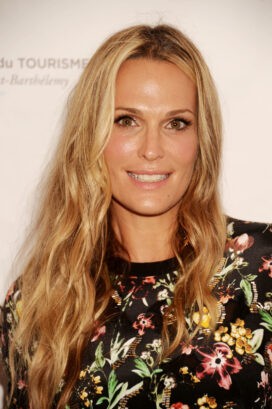 Supermodel Molly Sims was first known for her saucy TV ads for Old Navy clothing, in which she delivered the tag line “You gotta get this look!” She then became one of the most-seen American models of the early 2000’s. Molly Sims gave up law school at Vanderbilt University to try modelling in Europe, where she made the covers of Spanish Vogue and French Cosmopolitan. In 2001 she began hosting MTV’s House of Style, following in the footsteps of models Cindy Crawford and Rebecca Romijn-Stamos. She also appeared in ads for Victoria’s Secret and in the 2001 and 2002 Sports Illustrated swimsuit issues, sharing space with cover models Elsa Benitez and Yamila Diaz. In 2003 she joined the cast of the NBC drama Las Vegas in the role of Delinda Deline, and remained with the show through the end of its run in 2008. Her film roles include small roles in the films Yes Man (2008, with Jim Carrey), the teen comedy Fired Up! (2009), and the assisted-suicide comedy Chez Upshaw (2012).

Something in Common with Molly Sims