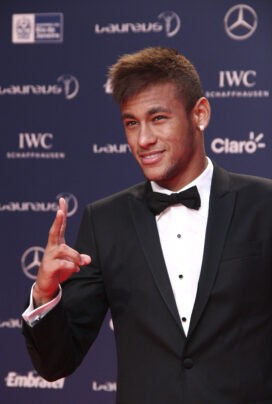 Neymar is the agile soccer forward who starred for Brazil at the 2014 World Cup. The 222 million Euro transfer fee for his move from Barcelona to Paris St-Germain in 2017 smashed the world record.

A child prodigy in a nation of child prodigies, Neymar made his professional debut for the Brazilian club Santos at age 17, in 2009. He quickly became known for his speed, elusive cutting and prodigious scoring with both feet. In 2013 he joined FC Barcelona of Spain’s La Liga, playing alongside Lionel Messi and becoming as famous in Europe as he was in Brazil.

Handsome as well as effective, Neymar signed deals with global sponsors ranging from Nike and Volkswagen to Red Bull. By 2014 The Sydney Morning Herald was saying Neymar had “the hairstyle and swagger of a carefree rock star,” and Forbes reported that he would earn $33.6 million that year as the world’s 16th highest-paid athlete. He was clearly Brazil’s premiere star at the 2014 World Cup, wearing the coveted #10 jersey for the national team. However, he was knocked out of the tournament with a fractured vertebrae after taking a knee in the back from Columbian player Juan Zuniga during Brazil’s quarterfinal win over Columbia.

Neymar’s nickname is Joia (or O Joia), meaning the gem… It is the habit of Brazilian players to go by a single name; others in history have included Pele and Ronaldo.

Something in Common with Neymar