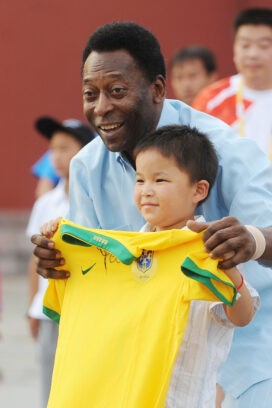 Pelé was a Brazilian sports icon and the most famous world footballer of his generation.

Born Edson Arantes do Nascimento, Pelé joined the Santos Football Club in 1956 and stayed with the club through his retirement in 1974, helping the team to nine championships in 18 years. Pelé scored his 1000th career goal on November 19, 1969 in game in Rio de Janeiro; he went on to score over 1200 goals in his professional career.

Pelé played on four Brazilian World Cup teams, including the country’s three World Cup wins in 1958, 1962 and 1970. The 1958 final was perhaps his most famous match, with Pelé scoring two goals in Brazil’s 4-2 win over Sweden.

Pelé became more famous in America in 1975, when he came out of retirement to play for the New York Cosmos of the infant North American Soccer League. Pelé retired again in 1977 after leading the Cosmos to the NASL championship. His 1977 autobiography was titled My Life and the Beautiful Game. Though he never played in the Olympics himself, Pelé was named Athlete of the Century by the world’s combined National Olympic Committees in 1999.

Pelé got his nickname as a child, but he has said he does not know how he got it or what it means. His 2022 obituary in The Guardian suggested that he got the nickname due to his own youthful mispronunciation of the name of the older soccer hero Bilé. He told The Guardian in a 2006 interview that he was named Edson after inventor Thomas Edison… Pelé played his last game for Santos on October 3, 1974… In March of 2002, the jersey Pelé wore in the 1970 World Cup final sold at auction for $220,850… For a time he dated Brazilian TV star Xuxa.

Something in Common with Pelé