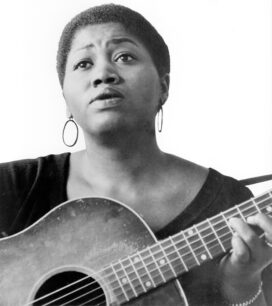 Odetta was an African American folk singer who lent her strong voice to the Civil Rights movement in the 1960s. A native of Alabama, she moved to Los Angeles when she was a little girl, and later studied classical music and voice at Los Angeles City College. After a brief stint in musical theater, Odetta began singing in coffeehouses in San Francisco and New York in the early 1950s. With career help from Harry Belafonte and Pete Seeger, Odetta began a recording career and released her first solo album in 1956. Odetta Sings Ballads and Blues was a big part of the folk revival of the 1960s and has been named as a major influence for white artists like Bob Dylan and Joan Baez. Easily recognized by her close-cropped hair and ever-present guitar, Odetta was front and center in the Civil Rights movement, marching with Martin Luther King, Jr. and belting out “We Shall Overcome” and “Oh, Freedom” at rallies. Her album Odetta Sings Folks Songs (1963) showcased her voice and cemented her reputation for passionate protest songs, and she was a hit at the Newport Jazz Festival in 1964 and ’65. Protest songs and folk music fell out of fashion in the early 1970s, but Odetta kept on performing around the world, including a tour of the Soviet Union in 1974. Over the years she collaborated with a variety of other performers, from Dylan and Count Basie to Nanci Griffith and the poet Langston Hughes. Never a chart topper, Odetta was nominated for a Grammy just once, for Blues Everywhere I Go (1999), but by the end of her career she was considered a national treasure. She was awarded the National Endowment for the Arts’ National Medal of Arts in 1999 by President Bill Clinton.

Something in Common with Odetta