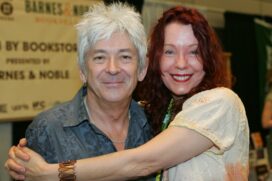 Pamela Des Barres became famous for being an unabashed rock groupie and celebrity-lover of the 1960s and ’70s.

Though “Miss Pamela” performed with the 1960s all-girl group The GTOs and had bit parts in a few movies, her real fame rests on her liaisons with rock legends like Mick Jagger and Jim Morrison.

In 1987 she published a tell-all book titled I’m With the Band: Confessions of a Groupie. The book was a hit, making her perhaps the most famous groupie in the history of rock and roll.

In 1992 she published a sequel, Take Another Little Piece of My Heart: A Groupie Grows Up.

The GTOs were formed by rocker Frank Zappa; the initials supposedly stood for Girls Together Outrageously… Pamela Des Barres was one inspiration for the character Penny Lane, played by Kate Hudson in the 2000 movie Almost Famous… She also helped inspire the 2002 film The Banger Sisters, with Susan Sarandon and Goldie Hawn as middle-aged former groupies. Hawn, by coincidence, is Kate Hudson’s mother.

Something in Common with Pamela Des Barres