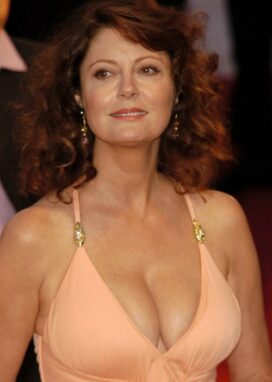 An Oscar-winner for her role in the somber drama Dead Man Walking (1995), Susan Sarandon’s early stardom came from her performance as the wide-eyed bride in 1975’s midnight-movie cult hit The Rocky Horror Picture Show (with Tim Curry). Since 1980’s Atlantic City (starring Burt Lancaster, she has played worldy-wise women of a certain sexy maturity — famous for loving it up with Catherine Deneuve and David Bowie in The Hunger (1983), for seducing baseball players Kevin Costner and Tim Robbins in Bull Durham (1988) and for leading Geena Davis down a dangerous path in Thelma and Louise (1991). A Hollywood leading lady of the 1990s, she starred in Lorenzo’s Oil (1992, with Nick Nolte), The Client (1994, with Tommy Lee Jones) and Stepmom (1998, with Julia Roberts). Now she’s equally famous as an outspoken opponent of Republican politics and the George W. Bush administration. A familiar face at the box office, Sarandon’s other films include The Banger Sisters (2002, with Goldie Hawn), Moonlight Mile (2002, with Jake Gyllenhaal), Elizabethtown (2005, with Orlando Bloom) and Enchanted (2007, with Amy Adams).

Sarandon announced in 2009 that she was splitting from her longtime companion, actor Tim Robbins. The two never married but were together for 21 years, having met on the set of Bull Durham in 1988. They had two sons: Jack (b. 1989) and Miles (b. 1992). She was formerly married to actor Chris Sarandon.

Something in Common with Susan Sarandon