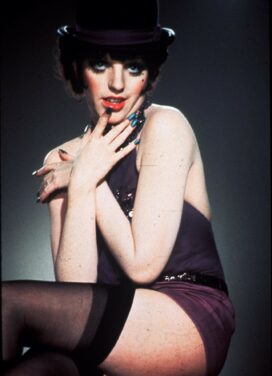 Liza Minnelli is the Oscar, Emmy and Tony-winning performer who is also the daughter of actress Judy Garland and film director Vincente Minnelli.

Like her mother, Liza Minnelli became known as a song-and-dance trouper of stage and screen; she won a Tony award for 1965’s Flora, the Red Menace and an Oscar for playing Sally Bowles in the 1972 film Cabaret. Her 1972 TV special Liza With a ‘Z’ (directed by Bob Fosse) won an Emmy. She also starred opposite Dudley Moore in the successful romantic comedy Arthur (1981). In the 1980s and 1990s Minnelli was especially known for her live revues, including shows with Frank Sinatra and his latter-day Rat Pack.

In later years Liza Minnelli has struggled with her health, having a hip replaced in 1994 and suffering through well-publicized battles with alcohol and pills, but she has bounced back into the public eye just as often. Among her many comebacks was a triumphant 2008 Broadway run titled Liza’s At the Palace. Her films include The Sterile Cuckoo (1969, directed by Alan Pakula) and New York, New York (1977, with Robert DeNiro). She also had a recurring role on the sitcom Arrested Development (2003-05).

Liza Minnelli married her fourth husband, producer David Gest, on 16 March 2002 in New York City; singer Michael Jackson was the best man, and the 14 matrons of honor included Elizabeth Taylor, Petula Clark and Gina Lollobrigida. Minnelli and Gest separated in July 2003 and were finally divorced in 2007, after Gest sued her for $10 million, claiming she had abused him physically during their marriage… Liza Minnelli’s first husband (1967-72) was entertainer Peter Allen… She was also married from 1974-79 to Jack Haley, Jr., the son of actor Jack Haley (who played the Tin Man opposite Minnelli’s mother in The Wizard of Oz), and to sculptor Mark Gero (1979-92)… Liza Minnelli was given a special Grammy Legend Award in 1990; some feel this qualifies her for EGOT status — held by those who have won an Emmy, Grammy, Oscar and Tony. Competitive EGOT winners include Audrey Hepburn and Mike Nichols.

Something in Common with Liza Minnelli