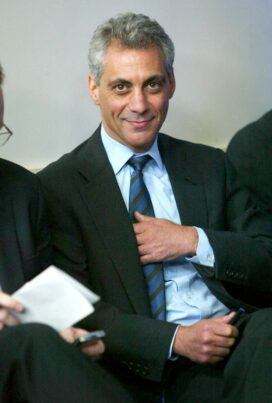 Rahm Emanuel is the former Illinois Congressman who became the first White House chief of staff for President Barack Obama and then the mayor of Chicago.

Rahm Emanuel is known for his blunt and hard-charging political style; The Washington Post has called him “a skilled and relentless operator” and “a sharp-elbowed partisan” with “renowned abrasiveness.” Emanuel has an undergraduate degree from Sarah Lawrence College (1981) and Master’s in Speech and Communication from Northwestern University (1985).

He grew up politically in Chicago, working with the legendary Chicago Democratic machine of Richard M. Daley, and from there he became an advisor to President Bill Clinton. After a few years with the investment bank Dresdner Kleinwort Wasserstein, Emanuel was elected to Congress from Illinois’ 5th District in 2002. After reelection in 2004 he was appointed chair of the Democratic Congressional Campaign Committee, and in that role he was widely credited with leading the Democratic charge that regained the party’s majority in the House of Representatives in 2006.

He was elected again in 2006 and 2008; after the latter election he resigned the seat to become chief of staff to the newly-elected Barack Obama. Emanuel quit the White House post in October of 2010 to run for mayor of Chicago, and in February 2011 he won that election with 55% of the vote, avoiding a runoff. He took office as the city’s 46th mayor on May 16, 2011, then was reelected for a second term in 2015.

On September 4, 2018, Rahm Emanuel announced that he would not run for reelection as mayor in 2019. Emanuel said “This has been the job of a lifetime, but it is not a job for a lifetime.”

Rahm Emanuel studied ballet at Sarah Lawrence College… His brother, Ari Emanuel, is the founder of the Hollywood talent agency Endeavor, and was the model for the character of superagent Ari Gold (played by Jeremy Piven) on the TV series Entourage… Rahm Emanuel himself was the model for Josh Lyman, the idealistic deputy chief of staff on The West Wing, a 2008 report in US Weekly claimed… Rahm Emanuel is sometimes called “Rahmbo” for his take-no-prisoners style… He is Chicago’s first Jewish mayor… Rahm Emanuel married the former Amy Rule in 1994. They have three children: Zachariah (b. 1999), Ilana (b. 2000), and Leah (b. 2002).

Something in Common with Rahm Emanuel