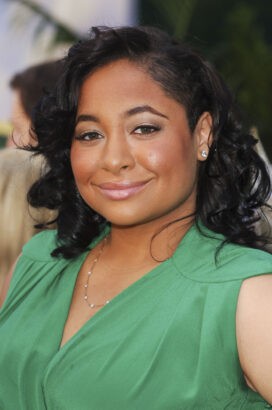 The star of The Disney Channel’s That’s So Raven, Raven-Symoné (sometimes credited as Raven) has been on television since she was a toddler. A native of Georgia, she moved to New York as a child and spent three years playing Bill Cosby‘s granddaughter on The Cosby Show (1989-92). Since then she has worked in television and feature films, including the TV series Hangin’ With Mr. Cooper (1993-97) and Eddie Murphy‘s Dr. Doolittle movies (1998 and 2001). Her sitcom on Disney made her a favorite of pre-teen girls, boosted sales of Raven merchandise and supported her music career. Raven-Symoné has released three solo albums, Here’s to New Dreams (1993), Undeniable (1999) and This Is My Time (2004), and appeared as one of the family-friendly foursome The Cheetah Girls in a TV movie and its soundtrack (2003).

Her debut album, released when she was 8 years old, included the single “That’s What Little Girls Are Made Of,” written by Missy Elliott.

Something in Common with Raven-Symoné