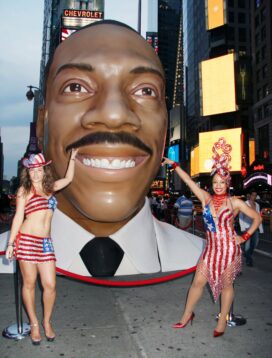 On SNL, Eddie Murphy was known for playful impressions of rocker James Brown, children’s host Mister Rogers, and Billie “Buckwheat” Thomas of the old Our Gang show, with Murphy tweaking racial stereotypes as part of the act.

He became a star with the success of his first three movies: the buddy movie 48 Hrs. (1982, opposite Nick Nolte), the comedy Trading Places (1983) and the frisky actioner Beverly Hills Cop (1984). Murphy also had success with his comedy recordings, winning a Grammy for Eddie Murphy: Comedian (1983) and even scoring a hit dance single in 1986 (“Party All The Time”).

Murphy often played several roles in the same movie, frequently under heavy makeup. His multi-role movies include the Nutty Professor films, Bowfinger, Coming to America (1988) and Vampire in Brooklyn (1995).

Early in his career, Eddie Murphy’s frequent use of raw language in his comedy act caused some controversy… Gossip sheets had a heyday in 1997 when Eddie Murphy was arrested for picking up a cross-dressing prostitute. Murphy explained that he was just being a “good Samaritan” and he was not charged with any wrongdoing.

Something in Common with Eddie Murphy