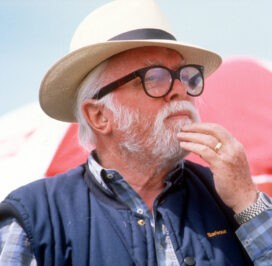 Richard Attenborough was a filmmaker and actor, best known for directing epic movies such as Gandhi and, in front of the camera, as the rich guy who built Jurassic Park (1993, directed by Steven Spielberg).

Richard Attenborough got his early training at the Royal Academy of Dramatic Art, and then began his career as an actor. During the 1940s and ’50s, Attenborough was a reliable player in a variety of British films, often playing schoolmaster or military officer types. He was also known for playing his baby face against expectations, as villains in Brighton Rock (1947), Seance on a Wet Afternoon (1964) and 10 Rillington Place (1970).

He began producing and directing his own films in the 1960s; his first film as a director was Oh! What a Lovely War (1969). During the 1970s and ’80s, Attenborough appeared less on screen and instead earned a reputation for directing big movies, including the war epic A Bridge Too Far (1977), the musical A Chorus Line (1985), and the biopics Gandhi (1982, starring Ben Kingsley) and Chaplin (1992, starring Robert Downey, Jr.).

He returned to acting as a kindly old gentleman, playing Kris Kringle in the 1993 version of Miracle on 34th Street, and bouncing around Spielberg’s Jurassic Park and its sequel, The Lost World: Jurassic Park (1997). His other films as an actor include The Great Escape (1963), The Flight of the Phoenix (1965), The Bliss of Mrs. Blossom (1968) and Elizabeth (1998).

Something in Common with Richard Attenborough