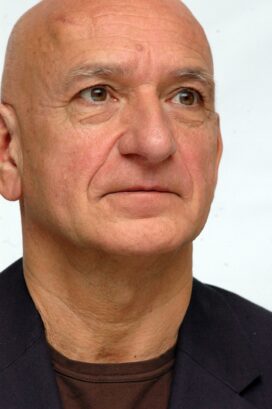 One of England’s most respected stage actors, Ben Kingsley became internationally famous after his Oscar-winning performance as Indian leader Mohandas Gandhi in Richard Attenborough‘s 1982 film Gandhi. Kingsley was accepted as a member of the Royal Shakespeare Company in 1967, and throughout the ’60s and ’70s he performed on stage and in television programs, usually in productions of William Shakespeare and Harold Pinter plays. Since Gandhi, Kingsley has played a number of supporting and lead roles in the movies, in addition to numerous stage productions in England and the U.S. His other Oscar nominations include for Bugsy (1991, starring Warren Beatty), Sexy Beast (2000) and The House of Sand and Fog (2003, co-starring Jennifer Connelly). His other movies include Sneakers (1992, with Robert Redford, Death And The Maiden (1994, with Sigourney Weaver), You Kill Me (2007), Shutter Island (2010, directed by Martin Scorsese), Hugo (2011, also by Scorsese) and Iron Man 3 (2013, starring Robert Downey, Jr.).

He was knighted by Queen Elizabeth II on his birthday in 2001.

Something in Common with Ben Kingsley