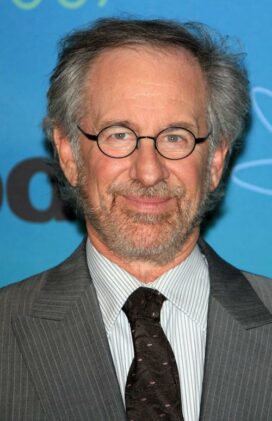 An Interview with Steven Spielberg

Ranking the Films of Steven Spielberg

Video of his speech before the Academy of Achievement

Steven Spielberg directed many of the top-grossing films in Hollywood history, including the blockbusters Jaws (1975), E.T. (1982), and many more. His first TV movie, Duel (1971), was successful enough to earn a theatrical release. The shark thriller Jaws (1975) made Steven Spielberg a hot property, and over the next 20 years he grew into the most successful movie mogul alive. His directing credits include hits like Close Encounters of the Third Kind (1977), Raiders of the Lost Ark (1981, co-produced by George Lucas), the cuddly-alien flick E.T.: The Extra-Terrestrial, the dinosaurs-on-the-loose classic Jurassic Park (1993), and War of the Worlds (2005). Raiders of the Lost Ark and Jurassic Park each spawned two sequels and are among the most lucrative film series of all time. Spielberg’s huge box office successes have allowed him to make more serious films as well, including The Color Purple (1985), Schindler’s List (1993) and Saving Private Ryan (1998) and Munich (2005). In 1994, with fellow Hollywood moguls Jeffrey Katzenberg and David Geffen, he founded the studio Dreamworks SKG; the company was sold to Viacom in 2006. Spielberg went many years without winning an Academy Award, but he broke through with best director and best picture Oscars for Schindler’s List, given in 1994. He also won a best director Oscar for Saving Private Ryan and was given the Academy’s Irving G. Thalberg Award in 1987 for his contributions to the industry. Steven Spielberg’s other films include Empire of the Sun (1987, based on the autobiographical book by J.G. Ballard), Catch Me If You Can (2002, starring Leonardo DiCaprio), Minority Report (2002, based on a story by Philip K. Dick), The Adventures of Tintin (2011) and Lincoln (2012, with Daniel Day-Lewis as President Abraham Lincoln).

Steven Spielberg married actress Kate Capshaw in 1991. He was married to actress Amy Irving from 1985-89… He took over Stanley Kubrick‘s long-planned film A.I. (2001) after Kubrick’s 1999 death… Steven Spielberg directed Joan Crawford in a 1969 episode of the TV series Night Gallery… Many of Spielberg’s films have been scored by composer John Williams.

Something in Common with Steven Spielberg