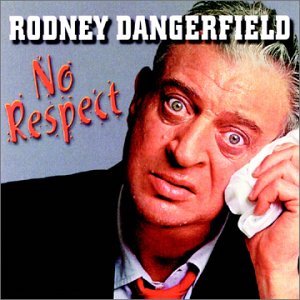 With bulging eyes and a comically tight collar, Rodney Dangerfield made a career out of telling audiences, “I don’t get no respect.”

Rodney Dangerfield began doing stand-up comedy in his teens, quit for more than a decade to live a “normal” life as a salesman, and then returned to stand-up after a divorce in 1962. A few years later he created the “no respect” schtick that became his bread and butter.

Dangerfield was a portrait of sweaty discomfort onstage, tugging at his signature red necktie and delivering one-liners like, “I was so ugly when I was born, the doctor slapped my mother.” Dangerfield became a regular guest on Johnny Carson‘s The Tonight Show and later opened his own Manhattan comedy club, Dangerfield’s.

In 1980 he starred as loudmouthed real estate developer Al Czervik in the lowbrow golf comedy Caddyshack (alongside Ted Knight as Judge Smails). The movie was a hit and gave Dangerfield a second career as an actor. His other films include Easy Money (1983), Back to School (1986, with Adrienne Barbeau) and Little Nicky (2000, with Adam Sandler).

Rodney Dangerfield performed under the name Jack Roy during his early comedy career. (His father was a vaudeville comic whose stage name was Phil Roy.) During his comeback in the 1960s, he took the name Rodney Dangerfield when it was suggested by a New Jersey club manager… Rodney Dangerfield’s films were mostly comedies, but he took a serious role as a sadistic father in the 1994 Oliver Stone film Natural Born Killers.

Something in Common with Rodney Dangerfield