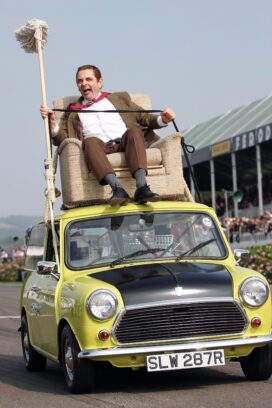 Comedian Rowan Atkinson is especially famous in England, first as a cult favorite in the television series Blackadder, then as an even bigger star in the series Mr. Bean.

During the 1980s, Atkinson soared to success with various versions of Blackadder, comedy that often revolved around Atkinson’s deadpan delivery of absurd dialog.

In the 1990s, Atkinson became even more widely known for the character Mr. Bean, and rubber-faced comedy became his calling card.

A slapstick film version of Mr. Bean was an international hit in 1997, and Atkinson has since appeared in small roles in big screen comedies, including Four Weddings and a Funeral (1994, with Hugh Grant), Rat Race (2001, with Whoopi Goldberg) and Love Actually (2003, with Liam Neeson).

He’s also starred as a bumbling spy in the spoofs Johnny English (2003) and Johnny English Reborn (2011), and on the English stage (notably as Fagin in a 2009 production of Oliver!).

Something in Common with Rowan Atkinson