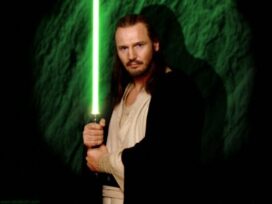 Irish actor Liam Neeson is known for his brainy-yet-brawny persona in serious dramas such as Schindler’s List (1993, directed by Steven Spielberg) and Michael Collins (1996, with Julia Roberts), as well as in he-man thrillers such as the Taken series (2008-14).

Liam Neeson was nominated for an Oscar for his role as heroic World War II businessman Oskar Schindler in Schindler’s List, and the film put him on Hollywood’s A-list. In 1999 he secured his place in sci-fi history by playing the Jedi knight Qui-Gon Jinn as George Lucas‘s Star Wars series returned from a long hiatus with the prequel The Phantom Menace and its 2002 sequel, Attack of the Clones.

Long seen as a thoughtful man in nuanced roles, Liam Neeson reinvented himself as a straight-up action hero in Taken (2008), playing a former CIA agent who tracks down the evil Albanians who have kidnapped his daughter. Taken grossed $225 million worldwide, about 10 times its production budget, and suddenly Neeson was brooding his way through a string of similar gun-toting, fist-fighting action pics, including Unknown (2011), The Grey (2012), Non-Stop (2014), and Run All Night (2015). He played off his stern persona for laughs in The Lego Movie (2014), among others.

Liam Neeson married actress Natasha Richardson in 1994. They had two sons: Micheal (b. 1995 — not “Michael”) and Daniel Jack (b. 1996). Richardson died after hitting her head in a freak skiing accident in 2009… Liam Neeson was once an amateur boxing champ in Northern Ireland… Liam Neeson played sex researcher Alfred Kinsey in the 2004 film, Kinsey… According to the Internet Movie Database, Liam Neeson once “worked as a forklift operator for Guinness.”

Something in Common with Liam Neeson