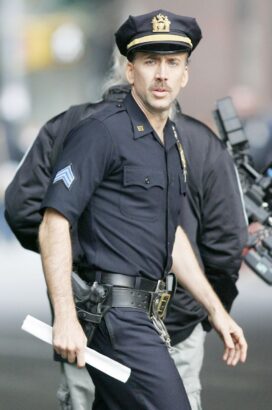 Nicolas Cage made his film debut in 1982’s Fast Times at Ridgemont High, but it was his role in the hit Valley Girl (1984) that launched his screen career. Cage was suddenly a reliable Hollywood star after the 1987 comedies Raising Arizona (with Frances McDormand) and Moonstruck (with Cher). In acting circles he became known for his intensity and penchant for improvisation on the set. He won an Oscar as the self-destroying drunk in Leaving Las Vegas in 1995, and yet by the end of the decade had remade himself as a muscled-up action hero, starring in big-budget movies like The Rock (1996, with Sean Connery), Con Air (1997, with Ving Rhames), Face/Off (1997, opposite John Travolta) and Gone in Sixty Seconds (2000, with Angelina Jolie). In 2003 he was again Oscar-nominated for playing nervous screenwriter Charlie Kaufman in the offbeat drama Adaptation. His other films include Bringing Out the Dead (1999, directed by Martin Scorsese), National Treasure (2004) and its sequel National Treasure: Book of Secrets (2007), The Weather Man (2005), The Wicker Man (2006, with Ellen Burstyn), and the sci-fi chiller Knowing (2009).

Cage is the nephew of filmmaker Francis Ford Coppola; Cage’s father is Coppola’s brother… Cage was married to actress Patricia Arquette from 1995-2001, and to Lisa Marie Presley (daughter of Elvis Presley) briefly in 2002 (they separated after four months of marriage but weren’t formally divorced until 2004). He married Alice Kim, a former waitress, in 2004; their son Kal-el Coppola Cage was born on 3 October 2005. Cage is reportedly a comic book fan, and Kal-el is the birth name of the fictional superhero Superman. Cage also has a son, Weston, born in 1990 to Cage and his then-girlfriend Christina Fulton.

Something in Common with Nicolas Cage