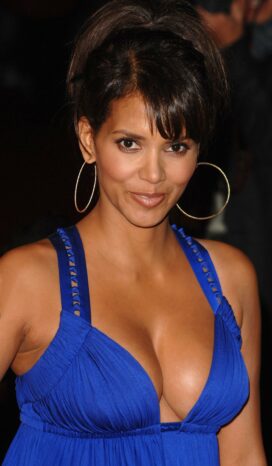 Halle Berry is the first African-American ever to win an Oscar as best actress, for her starring role in the drama Monster’s Ball (2001, co-starring Billy Bob Thornton).

Berry went from the world of beauty pageants in the mid-1980s to a television series, Living Dolls in 1989.

In 1991 she began performing in feature films, including Spike Lee‘s Jungle Fever.

Berry has appeared in a wide variety of films, in lead and supporting roles, with hits and misses at the box office. On television, she appeared in and produced the series Extant (2014-15), and was behind the BET series Boomerang (2019-20).

Berry’s other films include Swordfish (2001, with Jackman and John Travolta), the James Bond thriller, Die Another Day (2002, with Pierce Brosnan) and the girl-in-a-car-trunk-phoning-911 thriller The Call (2013).

Halle Berry was married to baseball star David Justice from 1992 to 1996, and to R&B musician Eric Benét from 2001 to 2005… Denzel Washington was also named best actor in 2002, making it the first time that African-Americans won the best actor and actress Oscars in the same year… In February of 2000, Halle Berry was involved in an auto accident that made the tabloids. With a serious head injury, Berry left the scene of the accident and was later charged. She eventually pled no contest to a misdemeanor charge… She took a break from films after the birth of her daughter Nahla in 2008. The father was model Gabriel Aubry; Berry and Aubry met in 2006, were a couple for four years, and announced their breakup in April 2010. Berry met her next husband, the French actor Olivier Martinez, while shooting the 2010 film Dark Tide. They were married on 13 July 2013, and announced that Berry was expecting their first child together, a boy, in the fall of 2013.

Something in Common with Halle Berry