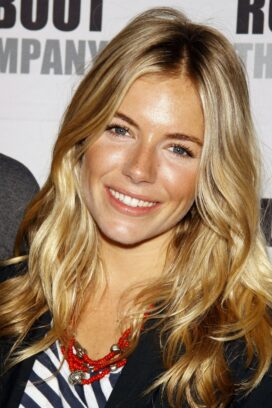 Sienna Miller’s early career as an actress was both aided and overshadowed by the fame she attained in 2005 as movie star Jude Law‘s fianceé. She met Law while the two were co-starring in the 2004 film Alfie; their relationship kept tabloid writers busy, especially after Law confessed to an affair with the nanny of his children from a previous marriage. Meanwhile, Sienna Miller had gone from a short-lived TV series (2003-04’s Keen Eddie) to roles in the films Layer Cake (2004, starring Daniel Craig) and Casanova (2005, starring Heath Ledger). Law and Miller announced a break-up in July of 2005, got back together within a year, then broke up again in late 2006. By 2007 Miller had moved into bigger movie parts, including a starring roles in Factory Girl (as Andy Warhol colleague and model Edie Sedgwick) and Interview (co-starring and directed by Steve Buscemi). She moved into the big-budget action arena in 2009 with a role in G.I. Joe: The Rise of Cobra, and in 2012 starred in the comedy-drama Two Jacks.

Sienna Miller was born in America but raised in both the U.S. and England… She gave birth to a daughter, Marlowe, in July of 2012. The father was Miller’s boyfriend, actor Tom Sturridge.

Something in Common with Sienna Miller