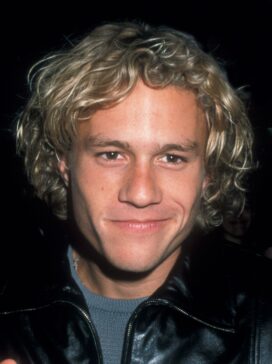 Heath Ledger was a rising 21st-century movie star until his shocking death in 2008. Ledger kicked off his career by playing the warrior hero Conor in the Dark Ages TV series Roar (1997). The series lasted only one season, but established Ledger as an up-and-coming heartthrob. He enhanced that reputation in the teen movie Ten Things I Hate About You (1999, with Julia Stiles), a loose retelling of Shakespeare‘s The Taming of the Shrew. He played the feisty son of fellow Australian Mel Gibson in The Patriot (2000) and returned to horseback for the jousting adventure A Knight’s Tale (2001). He also played a fictionalized version of Jacob Grimm in the 2005 Terry Gilliam film The Brothers Grimm. The same year he co-starred in the daring western Brokeback Mountain (directed by Ang Lee), with Ledger and Jake Gyllenhaal playing cowboys in love. Ledger was found dead in his Manhattan apartment on the afternoon of 22 January 2008. An autopsy determined that he had suffered an accidental overdose of prescribed anti-depressants, pain killers, and sleeping medications. Ledger had already finished filming his role as The Joker in The Dark Knight, a Batman film released in July 2008. The next year, Ledger was posthumously awarded the Academy Award as best supporting actor for the role.

Ledger reportedly was named Heathcliff after the brooding figure in the Emily Brontë book Wuthering Heights… Ledger and actress Michelle Williams are parents to a daughter, Matilda Rose, born in October 2005. The pair met while playing husband and wife in Brokeback Mountain; they were never married, and separated in 2007… Several drugs were mentioned in the medical examiner’s report on Ledger’s death. By brand name, they included: OxyContin, a painkiller; Xanax and Valium, both anti-anxiety drugs; and Restoril and Unisom, both sleeping aids.

Something in Common with Heath Ledger