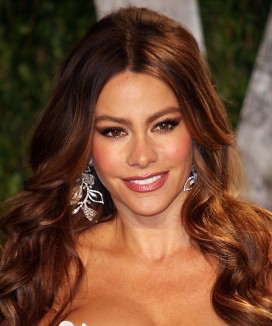 Sofia Vergara is a Colombian actress best known for her role as Gloria Delgado-Pritchett, Ed O’Neill‘s bombshell Latina wife in the sitcom Modern Family. Vergara got her start in Colombian TV commercials and international modeling, and during the 1990s she became a familiar face on TV through the travelogue Fuera de Serie. She paid her dues and earned her comedic chops on a string of television series in Spanish-language TV and American cable, including Hot Properties (2005), The Knights of Prosperity (2007), Amas de casa desperadas (2007) and Fuego en la sangue (2008). She also landed small roles in feature films, including Lords of Dogtown (2005, starring Heath Ledger) and Four Brothers (2007, starring Mark Wahlberg). Already a celebrity in Hispanic entertainment, Vergara’s big U.S. screen break came in 2009, as part of the ensemble cast of Modern Family. Her turn as O’Neill’s voluptuous and volatile wife earned her Emmy nominations in 2010 and 2011, and boosted her film career and her international celebrity status. Her other credits include a stint on Broadway in 2009 as Mama Morton in Chicago, and the films Madea Goes to Jail (2008, by Tyler Perry), New Year’s Eve (2011, with Katherine Heigl) and The Three Stooges (2012).

Something in Common with Sofia Vergara