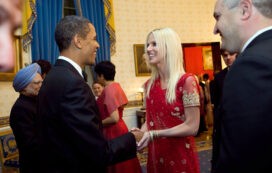 Tareq Salahi is 54 years old
Born: May 26, 1968
Birthplace: Washington, D.C., United States
Best known as: One half of the 2009 White House gate-crashing couple

Tareq Salahi and his wife, Michaele Salahi, breached White House security on 24 November 2009 in a successful stab at fame-at-any-cost celebrity. Tareq grew up in Farquier County, Virginia, where his parents started Oasis Winery in 1977. He studied business and enology (wine making) at the University of California in Davis, graduated in 1991 and returned to Virginia to help run the family business. With a reputation as a slick promoter, he served on the Virginia Winery Board (2000-03) and the Virginia Tourism Board (2006-09), and he and Michaele (married in 2003) were local high-society socialites known for polo-oriented charity events. The sudden notoriety from gate crashing a White House state dinner brought out unflattering revelations about the Salahis, who were immediately accused of trying to gain publicity in preparation for a TV show called The Real Housewives of Washington, D.C.. Details of the Salahis’ troubles include a longstanding feud with his mother over who should control Oasis (the company filed for bankruptcy in February of 2009) and a trail of lawsuits and disputes with creditors and employees. The Salahis, in limited interviews, claimed they were invited to the White House, and that it was all a misunderstanding to be cleared up at some later date. The Secret Service said the Salahi’s were not invited. The brouhaha brought them notoriety and plenty of publicity, as well as the threat of criminal charges. As the investigation dragged on, both appeared on Real Housewives and kept their names in the tabloids with various antics, including a 2011 report to police by Tareq that Michaele had been kidnapped — when in fact she was having a romantic tryst with Neal Schon, a guitarist for the 1970s rock band Journey.

While authorities were trying to figure out whether to charge the Salahis with a crime, they lost a judgment in civil court in December of 2009 to a landscaper they’d failed to pay. Ordered to surrender property in lieu of payment, Tareq Salahi handed over his designer watch. The next day jewelry experts proclaimed the watch a fake… Tareq’s father is Palestinian, his mother is Belgian… Tareq belonged to a lobbying group called the American Task Force on Palestine.

Something in Common with Tareq Salahi