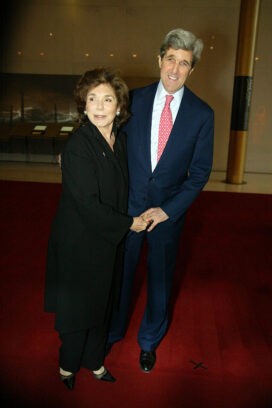 Teresa Heinz Kerry is the philanthropist and public figure who is the wife of Senator John Kerry of Massachusetts and the former wife of the late Senator John Heinz of Pennsylvania. Teresa Heinz Kerry was born in Mozambique, the daughter of a Portuguese medical doctor. She earned a bachelor’s degree from the University of the Witwatersrand in South Africa, and later attended the University of Geneva. In 1966 she married Henry John Heinz III (known as John), a member of the Heinz ketchup and condiment family. A Republican, he was elected U.S. Senator from Pennsylvania in 1976, and remained in that post until he was killed in a plane crash in 1991. As his widow, Teresa Heinz has since overseen the Heinz family’s charitable endowments, in which role she has particularly supported environmental causes in America and internationally. She first met John Kerry in 1990 (at an Earth Day rally, according to her official bio) and they were reintroduced the year after John Heinz’s death. The pair married in 1995. She was thrust into the spotlight in 2004, when John Kerry, a Democrat, ran for the presidency against the Republican incumbent, George W. Bush. He lost that race and remained in the Senate until 2013, when he was named Secretary of State by President Barack Obama.

According to a 2003 article in USA Today, Teresa Heinz Kerry “speaks Portuguese, English, French, Spanish and Italian”… She had three children with John Heinz: H. John Heinz IV, Andre, and Christopher… Her stepchildren with John Kerry are Vanessa and Alexandra Kerry… Though a Republican when she married John Kerry, Heinz Kerry later registered as a Democrat… For details on her counterpart in the 2004 elections, see our profile of Laura Bush… Although she is called Teresa Heinz Kerry, her legal name is simply Teresa Heinz, she told USA Today in 2004: “‘My legal name is still Teresa Heinz. Teresa Heinz Kerry is my name… for politics. Just so people don’t ask me questions about so and so is so and so’s wife or this and that. Teresa Heinz is what I’ve been all my growing-up life, adult life, more than any other name. And it’s the name of my boys, you know?… So that’s my legal name and that’s my office name, my Pittsburgh name.”

Something in Common with Teresa Heinz Kerry