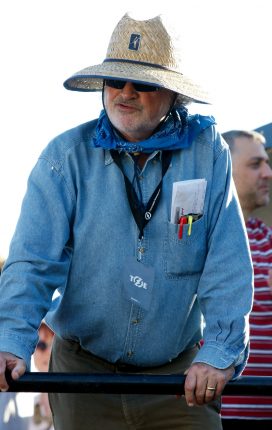 Terrence Malick is the award-winning writer and director known for feature films that are as thoughtful and ethereal as they are rare. He was Oscar-nominated as best director for both The Thin Red Line (1998) and The Tree of Life (2011).

Terrence Malick was born in Illinois but grew up in Texas and Oklahoma; his father, Emil Malick, worked for Phillips Petroleum. Terrence Malick studied philosophy at Harvard and graduated in 1966, then went to Magdalen College, Oxford as a Rhodes Scholar. He worked briefly as a journalist and then returned to the U.S. to teach philosophy at the Massachusetts Institute of Technology.

Eventually he attended the American Film Institute, and in 1971 he raised the money for his first feature: Badlands, a murder-spree drama starring Sissy Spacek and Martin Sheen. After two years of filming and editing, Badlands was released to acclaim in 1973, establishing Malick’s reputation for unusual subjects and visual poetry. In 1978 he directed Days of Heaven, a handsome and slow-moving art-house hit. The film went over budget and schedule, due in large part to Malick’s detail-obsessed style of directing and editing. (These traits, plus his habit of avoiding reporters, earned Malick comparisons to Stanley Kubrick; the Daily Telegraph once called him “The J.D. Salinger of the movie business.”)

Seemingly soured by the experience, Malick spent nearly two decades living in France and traveling before directing his next feature, the World War II drama The Thin Red Line. His other major films include The New World (2005), starring Colin Farrell as Captain John Smith, Knight of Cups (2015, starring Natalie Portman and Christian Bale) and Tree of Life, a metaphysical family drama starring Brad Pitt and Jessica Chastain. Tree of Life won the Palme de Or at the 2011 Cannes Film Festival and was nominated for a best picture Oscar as well as winning Malick the best director nomination.

Terrence Malick “is the son of an oil company executive of Assyrian descent,” according to a 2 June 2011 article in the Austin American-Statesman. The article continues: “Despite numerous reports that Malick is a Waco native, he was actually born near Chicago in November 1943… His grandparents Nanajan and Avilmelk Malick emigrated to the United States from Urmia, in what is now part of Iran, in the 1930s”… Terrence Malick has been married three times: to Jill Jakes (from around 1970 until their divorce in 1978), to Michelle Morette (from 1985 until their divorce in about 1996), and to Alexandra Wallace (from about 1997 to present)… According to the book Easy Riders, Raging Bulls, Malick has two younger brothers, Chris and Larry. “Larry went to Spain to study guitar with Segovia, a taskmaster of legendary proportions. In the summer of 1968, Terry learned that his brother had broken both his own hands, apparently distraught over his studies. Terry’s father asked him to go over to Spain to help Larry. Terry refused. His father went himself, and returned with Larry’s body. He had apparently committed suicide”… Badlands was based on the real-life killing spree by Charlie Starkweather in 1958.

Something in Common with Terrence Malick