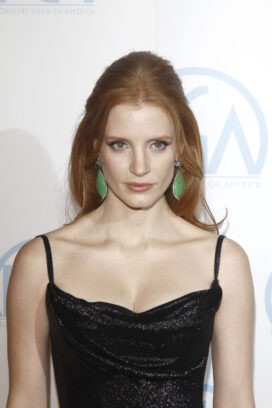 American actress Jessica Chastain won an Oscar as the star of The Eyes of Tammy Faye.

Chastain was also nominated for a best actress Oscar for Zero Dark Thirty (2012) and best supporting actress for The Help (2011).

Chastain burst onto the scene with six feature films in 2011, including Terrence Malick’s Tree of Life (she played Brad Pitt‘s wife) and Shakespeare‘s Coriolanus (with Ralph Fiennes and Gerard Butler).

A 2003 graduate of New York’s Julliard College, she began her film and TV career immediately after school. After working on stage and in TV shows such as Veronica Mars in 2004 Law & Order: Trial by Jury in 2006, Chastain made her feature film debut as the lead in 2008’s Jolene.

Three years later, the copper-haired Chastain had made eleven movies, including The Debt (2010, starring Helen Mirren), The Fields (2011, starring Sam Worthington) and The Help (with Emma Stone and Octavia Spencer).

Jessica Chastain is cagey about her birthplace, although most sources say she was raised in Northern California.

Something in Common with Jessica Chastain