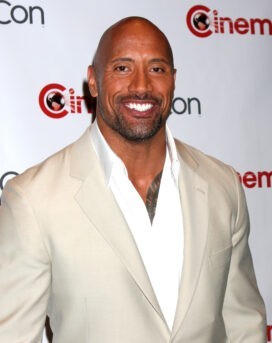 See photos of The Rock

Facts about The Rock

The Rock is 51 years old
Born: May 2, 1971
Birthplace: Hayward, California, United States
Best known as: Professional wrestling heavyweight and star of The Game Plan
Buy from Amazon.com: The Rock DVDs and streaming video

Burly, snarly and yet lovable, Dwayne “The Rock” Johnson turned his pro wrestling popularity into an acting career with the lead role in The Scorpion King in 2002. The son of pro wrestler Rocky Johnson, Dwayne attended the University of Miami on a football scholarship. After a back injury cut short a career in the Canadian Football League, Johnson went into the family business. Early in his pro wrestling days he played off his Samoan heritage with stage names like Flex Kavana and Rocky Maivia, before settling on simply “The Rock.” A giant of a man with chiseled features, he played both hero and heel before finally growing into a crowd favorite. By 2000 he had become pro wrestling’s undisputed heavyweight star, and he took the opportunity to jump into acting, where his Schwarzenegger-like physique won him a small part in The Mummy Returns (2001, with Brendan Fraser). Johnson was rewarded with the lead in the spinoff film The Scorpion King the next year. A bona fide leading man and action hero, he has appeared in Walking Tall (2004), Doom (2005) and Gridiron Gang (2006). Johnson also turned in a terrific comedic performance in the John Travolta flop Be Cool (2005), starred as a befuddled dad in the family comedy The Game Plan (2007, billed as Dwayne “The Rock” Johnson) and also starred in The Tooth Fairy (2010). His other films include The Other Guys (2010, with Samuel L. Jackson), Fast Five (2011, with Vin Diesel), and G.I. Joe 2: Retaliation (2012).

According to his official site, The Rock stands 6’5″ and weighs 255 pounds… He played one year with the Calgary Stampede of the Canadian Football League… “If you smell what the Rock is cooking…” (i.e., “if you get my drift”) is his signature interjection from the wrestling ring… His heritage is Samoan on his mother’s side, African-American on his father’s side… His maternal grandfather, Chief Peter Maivia, also was a professional wrestler.

Something in Common with The Rock