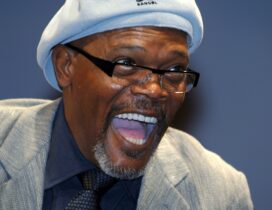 After 20 years in Hollywood and dozens of movies, Samuel L. Jackson became an international star for his portrayal of Jules, the righteous, afro-clad hit-man in the 1994 film Pulp Fiction.

Alternately amusing and menacing on screen, Jackson is one of the busiest actors in the movies, a character actor who can also play the lead and carry a movie.

Since then he’s stayed busy in films, notably as Jedi warrior Mace Windu in the George Lucas Star Wars franchise (The Phantom Menace, Attack of the Clones,  Revenge of the Sith, et al) and as Nick Fury in the Marvel catalog of films (Iron Man, The Avengers, et al).

In 2006 Jackson’s all-out, multimedia promotional blitz for the action feature Snakes On A Plane became a newsworthy event in itself.

Jackson’s voice work beyond The Incredibles includes the series Afro-Samurai (2007) and Star Wars: The Clone Wars (2008).

Jackson appears, uncredited, at the end of the 1998 movie Out of Sight (directed by Steven Soderbergh).

Something in Common with Samuel L. Jackson