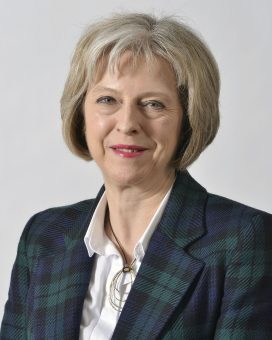 See photos of Theresa May

Facts about Theresa May

Theresa May became the new leader of the Conservative Party, and the new prime minister of the United Kingdom, on July 13, 2016. She replaced the resigning David Cameron, who had been prime minister since 2010.

May resigned in July of 2019, after her popularity plummeted when she failed to guide the U.K. through a separation from the European Union (commonly called “Brexit”).

The daughter of a minister of the Church of England, Theresa Brasier studied geography at St. Hugh’s College of Oxford University. (She met her husband, Philip May, there in 1976 and changed her name to Theresa May when they were married in 1980.)

After college she went to work for the Bank of England and then the Association for Payment Clearing Services (later renamed as the UK Payments Administration Ltd, or UKPA). At the same time she served as a local councillor for Merton in south London.

Theresa May first ran for Parliament in 1992, and was elected as a member from Maidenhead in 1997. After a dozen years of rising through the ranks, she became Home Secretary under new Prime Minister David Cameron in 2010.

She served in that role for six years until 2016, when the UK political world was rocked by ‘Brexit,’ the vote by Britons to leave the European Union. Cameron immediately announced that he would resign; after two weeks of maneuvering, May was chosen by her Conservative Party colleagues to succeed him.

The BBC later reported that May’s “carefully cultivated image of political dependability and unflappability” made her the natural unity choice of the Conservative Party as Cameron’s successor. (The Guardian likened her to “a calm headmistress in a chamber full of over-excitable public schoolboys.”)

Cameron held his last “Question Time” on the afternoon of July 13th, 2016, and May officially succeeded him later that day. As Prime Minister she unexpectedly called for a snap election to be held in June of 2017, expecting that a Conservative victory would strengthen her hand in Brexit negotiations with Europe.

Instead (and also unexpectedly), her party lost seats to Labour, leading to a hung parliament. Her next 18 months were consumed with Brexit negotiations, which ended in a crushing 432-202 vote against her Brexit plan on January 15, 2019.

May resigned July 23, 2019 and was succeeded in office by Boris Johnson the next day.

Theresa May “revealed in 2013 that she had been diagnosed with Type 1 diabetes and would require insulin injections twice a day for the rest of her life,” according to the BBC… She and Philip May have no children… Theresa May was the second female prime minister in UK history, after Margaret Thatcher, who was prime minister from 1979-1990. The third female PM, Liz Truss, took office in 2022.