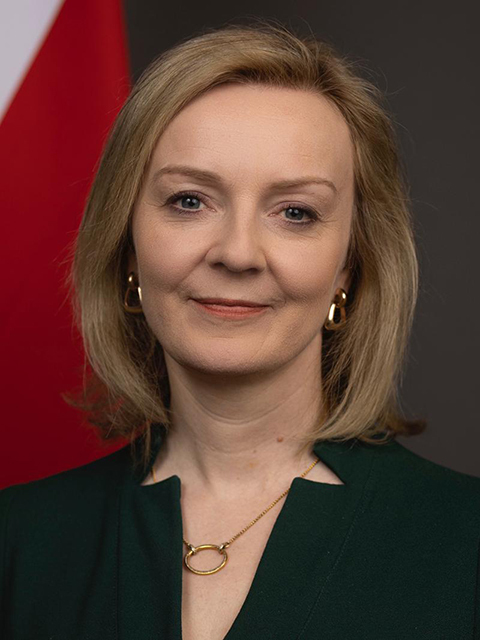 Liz Truss is the Conservative politician who became prime minister of the United Kingdom in 2022. She replaced fellow conservative Boris Johnson, who resigned in disgrace after a series of scandals. She herself resigned after only 45 days in office.

Liz Truss grew up in England and in Scotland (1979-85). She has said she was “born in Leeds to left-wing parents,” but she joined the Conservative Party upon graduation from Merton College, Oxford in 1996. She began work at the petroleum company Shell, qualifying as an accountant in 1999. In 2000 she moved to the telecommunications company Cable & Wireless, where she eventually rose to become economic director.

Politically, Liz Truss is known as a fiscal conservative with libertarian tendencies, being a firm proponent of free trade, low taxes, and reduced government. (As her website put it in 2022, “She has argued strongly against the Big State policies of Jeremy Corbyn’s Labour Party, which she believes will damage choice, innovation and prosperity.”) She voted ‘remain’ in the 2016 referendum on Britain’s membership in the European Union — Brexit, as it became known — but embraced the party’s pro-Brexit position after the election.

Boris Johnson agreed to step down as Conservative Party leader in 2022, in the midst of a British economic crash a series of scandals related to Covid, and a struggle to implement Brexit. Liz Truss emerged as the new Tory leader, beating former chancellor of the exchequer Rishi Sunak in a party vote by 57.4%-42.6%. In her victory speech, she promised to “deliver a bold plan to cut taxes and grow our economy,” adding that “we will deliver, we will deliver and we will deliver.”

Liz Truss ran into political trouble in her third week in office, when she and her finance minster, Kwasi Kwarteng, announced a “mini-budget” which included plans for £45 billion of tax cuts. The announcement caused alarm in the British financial sector — the British pound plunged almost to parity with the U.S. dollar — and fears that social services would be cut at a time when the inflation rate was nearing 10%.

Truss later reversed the tax cuts, and Kwarteng resigned, but the damage was done. Having lost the confidence of her party, Truss announced her resignation on October 20, 2022. She said that a fresh Conservative Party leadership election would be held within the week, and that she would stay on as prime minister until then.

Liz Truss was the UK’s third female prime minister, following Margaret Thatcher (1979-90) and Theresa May (2016-19)… Liz Truss married accountant Hugh O’Leary in 2000. They have two daughters: Frances (born 2006) and Liberty (born circa 2009)… Just to clarify, Liz Truss did not actually win a general election for prime minister in 2022; she won an election for leadership of the Conservative Party, and in the British system, the leader of the party in power takes the role of prime minister… Most sources say that Liz Truss was born in Oxford, England. The website FreeBMD.org.uk shows a transcription of a 1975 birth record from Oxford, which lists the birth of Mary Elizabeth Truss there, to a mother with the maiden name of Grasby (which was the maiden name of Truss’s mother). However, Liz Truss’s official site says she was “born in Leeds.” Her father was for many years a professor of mathematics at the University of Leeds… Per BBC News, the previous record for shortest-serving prime minister “was set at 119 days by George Canning who died in office in 1827.”