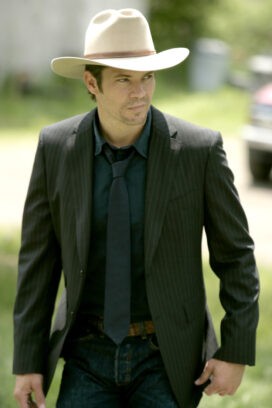 Timothy Olyphant grew up in California, where he spent most of his young life as a competitive swimmer. He began his acting career on the New York stage, but moved to the Los Angeles screen world in the late 1990s, first getting notice for the film Scream 2 (1997) and the TV productions Ellen Foster (1997) and Sex and the City (in a 1998 guest role).

Olyphant was a bright spot in Go (1999) and appeared with Nicolas Cage in the action movie Gone in Sixty Seconds (2000), but it was Deadwood that made him famous — and turned him into one of Hollywood’s mean-staring tough guys.

Timothy Olyphant has also carried films as a leading man, as in The Crazies (2010), and shown his comedic side as a guest star in the series The Office (in 2010) and a regular on The Santa Clara Diet (2015-17).

His other films include Stop-Loss (2008), A Perfect Getaway (2009, with Milla Jovovich), the animated feature Rango (2011, starring Johnny Depp) and the Quentin Tarantino film Once Upon a Time in Hollywood (2019, starring Leonardo DiCaprio and Brad Pitt).

Something in Common with Timothy Olyphant