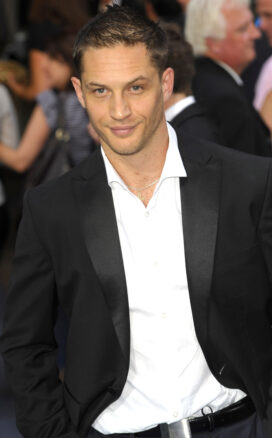 British actor Tom Hardy won early raves from critics for his physical transformations in feature films and television movies, but his turn as a dream invader in 2010’s Inception brought him new attention and became his breakout role. Tom Hardy started out playing tough-guy soldiers in Band of Brothers and Black Hawk Down (both 2001), then made his mark as an evil clone of Captain Jean-Luc Picard (played by Patrick Stewart) in the 2002 film Star Trek: Nemesis. By his own admission, Hardy’s brilliant start was stymied by alcohol and cocaine abuse, but he bounced back a few years later in the BBC television movie Stuart: A Life Backwards (2007) and then as a flirty associate of Gerard Butler) in Guy Ritchie‘s 2008 film RocknRolla. Despite a powerful performance as the violent British criminal Charles Bronson in 2008’s Bronson, Hardy was still unknown to most audiences. Then he played Eames, a British identity forger on a sci-fi dream team, in the Christopher Nolan film Inception. The film was a big hit, and Hardy is now recognized as an actor who will go to great lengths for a performance. He went from Inception to accepting the iconic role of Mad Max in 2015’s Fury Road, the reboot of the Mel Gibson and George Miller franchise from the 1980s, and took the role of the lead villain, Bane, in Christopher Nolan’s 2012 Batman film The Dark Knight Rises.

Something in Common with Tom Hardy