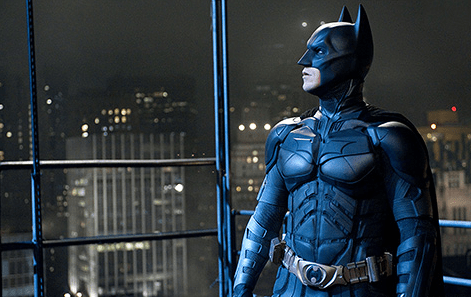 [ Note: Our own Mr. Hehn files his review of the newest Batman movie, The Dark Knight Rises. ]
We saw The Dark Knight Rises last Saturday night. It was a fine enough time at the movies — there’s no doubt that Christopher Nolan knows how to make a big spectacle of a movie.
But it took about five minutes of post-movie discussion for us to realize it’s really not a very good movie.
For one thing, I think Batman is actually on screen for a total of about 20 minutes.
The rest of the time, it’s Bruce Wayne moping and limping about while a whole lot of gabbing goes on. The “story” — such as it is — is mostly related through expository speeches. The movie is action-packed, that’s for sure. In fact, it feels like a whole bunch of action sequences strung together.
Alfred the Butler does something entirely un-Alfred like in this movie, but I suppose I’ll leave that argument for the fans who want to focus on the mythology or the canon or whatever. 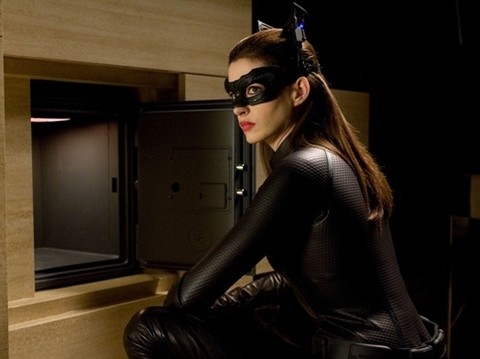 Anne Hathaway is fine as the Catwoman, but they don’t do much with the character, and they completely fail to exploit how hot she looks in that suit.
The biggest failure is that the villain, Bane, is a cardboard cutout of a villain. You know he’s supposed to be bad, but you don’t really know why or even what he is supposed to be up to. And he’s got a mask on the whole time, plus a big heavy coat — it’s as if they said, “let’s take that character Humongous from The Road Warrior, only cover him up and make him less threatening and less interesting.”  Oh, and then let’s over-dub his voice so that you can only understand 60% of what he says. 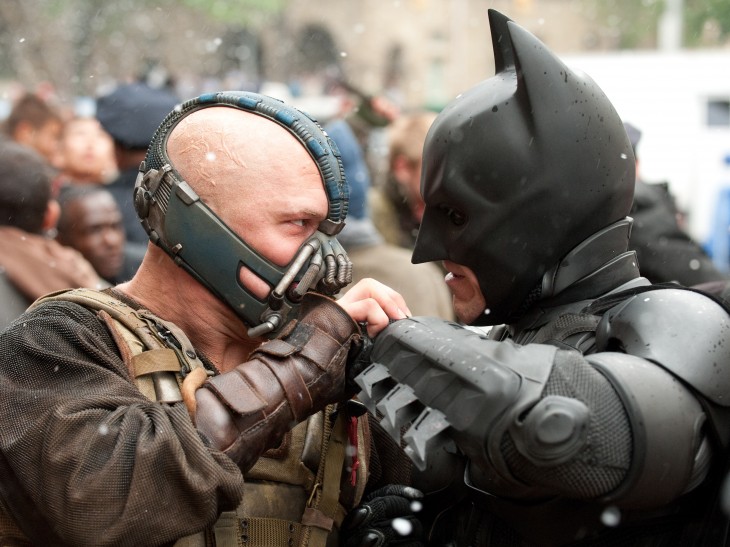 And Bane in the movie (this is a small point) is like Bane in the comic: to live he has to have this apparatus hooked up to his head. In the comic book, you spend most of your time thinking, “Hey, Batman, all you have to do is yank that machinery from his head and you win.” In fact, that’s what finally happens in the comic.  Likewise, in the movie, while they’re fighting, you’re thinking, “Just PULL THAT THING OFF HIS FACE AND HE DIES!”
Before seeing this movie I read all about the efforts critics and viewers were making to avoid providing spoilers.
I don’t know what they’re talking about. There aren’t any real spoilers, in my opinion. You could have told me how this movie “ends” and it wouldn’t have changed my viewing experience.
Yes, it has a sort of “twist” at the end, but it’s one of those that isn’t very satisfying because you think, “Wait, now… there’s NO WAY we could have known that, that comes out of nowhere.” Therefore, you don’t care.
Joseph Gordon-Levitt is good. Christian Bale‘s Batman isn’t very interesting, he’s just there. Marion Cotillard does a fine enough job. You’d never know that Bane is played by Tom Hardy, a very charismatic and interesting screen presence who is buried beneath a mask for all but 4 seconds of the movie. 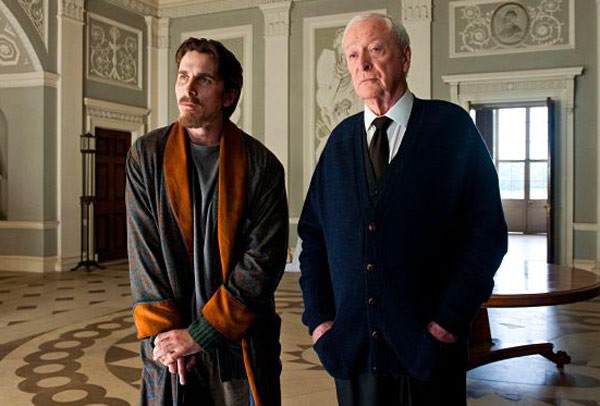 Michael Caine gets a chance to go full-drama a few times, but, as I said, his actions in the movie are completely what Alfred would NOT do. Gary Oldman spends 97% of his screen time in a hospital bed (I hate movies and shows where the actor is in a hospital bed).
I’m still pretty much on board with Chris Nolan movies, but I gotta feeling he’s one of those fellers who makes it look like he’s being very smart and clever, but when you think for a second you realize it’s not very deep.
As a moviegoer, I like Memento and The Prestige and Insomnia and Inception and his Batman movies.
But this new movie has lots of parts that are dumb and cliché, right down to the climax, where the villain explains in great detail the entire plan leading up to this point in a speech that has you screaming. Once again, a bad guy is yakking it up about how much he wants to kill the good guy.  All right, already! Shoot him and be done with it!

Now see our biography of Batman »